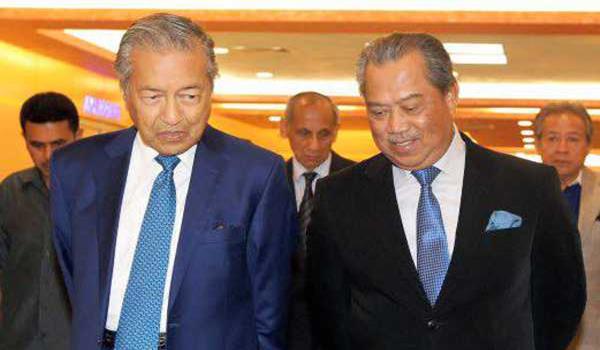 WHEN THE ANTI-NAJIB FORCES ARE BANKRUPT OF ISSUES

When I say ‘anti-Najib forces’ I mean both Pakatan Harapan and the ‘Team B’ in Umno led by Muhyiddin Yassin a.k.a. Si Kitol and Tun Dr Mahathir Mohamad a.k.a. M42. In fact, there is some form of alliance between the two groups who are united in their desire to oust Prime Minister Najib Tun Razak.

A year ago they were on very strong footing, using the 1MDB issue as the catalyst to attack Najib. Then 1MDB appointed Arul Kanda Kandasamy as its new President and CEO and he immediately sat down to work on his rationalising and debt-reduction plan.

Six months later, Arul presented the plan to the Cabinet and explained how it was going to be done and that he would need six months to complete the exercise — which is quite remarkable considering that most turnaround exercises would need at least one or two years, and sometimes longer.


The most famous turnaround exercise in history was probably the one that Lee Iacocca did for Chrysler in 1979. The company was going bankrupt when Iacocca took over so he went to Congress to ask the government to extend to Chrysler loan guarantees of US$1.5 billion.

Congress reluctantly passed the ‘Chrysler Corporation Loan Guarantee Act of 1979’ and President Jimmy Carter signed it into law on 7th January 1980. It took four years for Iacocca to turn Chrysler around and in 1983 Chrysler repaid its loans many years ahead of schedule, giving the US government a profit of US$350 million. In fact, Congress never thought it was going to get the money back so they were prepared to write it off.

And that made Iacocca a household name and the guru of turnaround exercises. Will one day economic students also be studying Arul Kanda Kandasamy like they are studying Lee Iacocca? I suppose geniuses are recognised as one many years after their time like Leonardo da Vinci and Galileo Galilei were.

The 1MDB critics still insist that Arul failed. It was supposed to be a rationalising and debt-reduction exercise, they say. All 1MDB did was to sell off its assets to repay its debts. But then that is what a rationalising and debt-reduction exercise is all about. You cut your losses by hiving off non-income generating assets. You try to create cash flow. You do some asset stripping, especially when the assets you bought are now higher in value than what they were paid for.

And if you do not understand this then you know very little about what a rationalising and debt-reduction exercise is and should not be making comments. It is so fundamental that even I could have done it if Najib had given me the job — with due respects to Arul who I am not trying to insult.

They also raise the issue of 1MDB requiring an extension to file its accounts. That must mean there is something wrong with the accounts. Arul has already explained that the audit cannot be completed because the books have been seized by the authorities. So how can the auditors complete the audit when they don’t have possession of the books? If you want the audit to be completed then return the books so that it can be done.

The next complaint is that 1MDB got those assets at a cheap price. So what? 1MDB is government-owned. So it is from the right pocket into the left pocket. PNB, LTAT, Tabung Haji, and hundreds of other government-owned entities (state and federal), GLCs, trust funds, etc., have been getting assets cheaply since long before the New Economic Policy was launched 45 years ago.

This has been going on for more than 45 years but it has never been an issue before this. Why is it an issue now and why is it an issue only when it concerns 1MDB? I even know of countless individuals of all races who are proxies or cronies of those who walk in the corridors of power who have been getting ‘pink forms’ since the 1970s.

And it was even more rampant during the 1980s when Dr Mahathir took over as Prime Minister. In fact, even I got one ‘pink form’ back in the 1980s and I made more than RM1.5 million from it. And I only needed to come out with RM250,000 and the bank gave me a loan of RM1 million to pay for the difference. And I made that RM1.5 million profit in just one year.

So what is it that 1MDB did that was ‘not normal’? And Dr Mahathir of all people should know because it was he who introduced the system. And when the Terengganu Branch of the Malay Chamber of Commerce was sued by the bank and was facing bankruptcy, I managed to get a ‘pink form’ for them and after the ‘rationalising and debt-reduction exercise’ the Malay Chamber ended up with a cash surplus of almost RM1 million.

It is only ignorant people who criticise what 1MDB did to avoid bankruptcy. Or maybe they know but are pretending they do not. And they question Najib about the RM2.6 billion donation — where it came from and what he did with the money. What if people start questioning the alleged RM1 billion that Pakatan Penang received and the alleged RM1.5 billion that Pakatan Selangor received?

Yes, be very careful about how you korek other people’s affairs when your own affairs are not that kosher as well. Whether Umno is clean or not is one issue. My bone of contention is that those who are digging up what Umno is doing are themselves not clean as well. It is just that we are ‘malas’ to drag up their shit because the die-hard Pakatuns will not believe it anyway. So why bother?