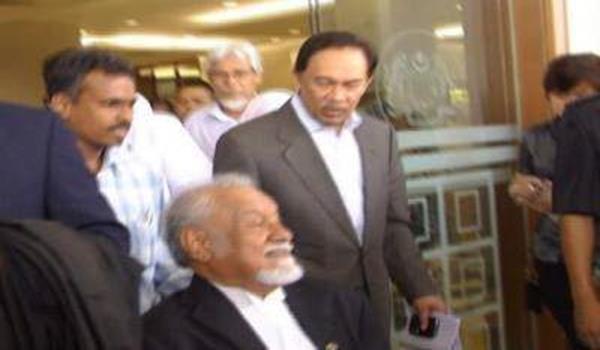 Cronysm and nepotism are few of the accusations which are often made by Pakatan Rakyat towards Barisan Nasional even though they are the ones who practice such things.

As BN leaders who are accused for focusing on their children or nephews and nieces in providing them posts and that all of them had proven that they ‘got up there’ with through credible processes and legitimately. Moreover, no BN leaders and their family members ever get to hold posts in a same era, proving that they did not get their posts automatically.

Instead, for PR leaders, their children and in laws could simply get appointed for high posts, as if it would be a preparation for them to inherit their parents’ throne. It is clear that democracy is something objective in the administration for Pakatan Rakyat and this is proven when their own General Leader was not even appointed through democracy process.

The Shadow Cabinet which was presented by PKR also clearly showed the highest level of nepotism within the party. Anwar Ibrahim who took himself as the future Prime Minister and appoint his wife as the Minister of the Prime Minister’s office and his daughter as the Federal Territory’s Minister.

To defend PR, Karpal Singh made one of the funniest statement in political history by urging rakyat not to worry with the practice of nepotism practice in PR.

His excuse, all of the wives, children and in-laws of PR leaders who are holding high posts have shown their credibility and qualification. But, at the same time, Karpal also denied that his party acknowledges the list of Shadow Cabinet which was presented by PKR.

This statement was seen as one of the saddest statement ever made by Karpal to justify nepotism practice in PR.

Just what Nurul Izzah has proven to make her qualified to hold the post as Federal Territory’s Minister? And is Karpal’s rejection towards the Shadow Cabinet rise due to the fact that he thinks that his son, Gobind Singh, deserves the post more than Nurul Izzah?

This is the dilemma which we can see in Karpal where he really want to criticize Anwar’s nepotism but even he cannot do such a thing because even his own party does the same thing.

Children of BN leaders who are involved in the political world such as Dato’ Mukhriz Mahathir and Dato’ Seri Najib Tun Razak himself had given so much by championing various programs such as entrepreneur, youth and others long before they get to where they are now.

But, what did Nurul, Gobind, Guan Eng or Betty has done to surpass smaller leaders of PKR and DAP who had proven that they deserve important posts within the party and they deserve to be Cabinet Mnisters if PR rules?